Hand rash is also known as eczema or dermatitis. Dyshidrotic eczema is the scientific term used for a rash on the hands.  A rash on the hands is not just an unsightly condition, but a telltale red flag of something wrong in the body.

Around two to nine percent of the population experience hand rashes.

In this article, we will discuss the possible causes of hand rash, identify the symptoms and its treatment.

In the middle of cold, dry winters it is pretty normal to experience itchiness, dryness and redness between the fingers of your hands. This skin condition often fades the moment you apply a cream or moisturizer. However, if the condition persists and becomes worse over time, causing intense redness, itching, peeling and even bleeding, then that unsightly red rash on your hand, might be more involved than you originally thought. There are a myriad of causes behind the development of hand rash, so the first step you must always take is consulting with a doctor. Yes, there are certain home remedies that you can use to heal and cure the hand rash forever, but use them only if your doctor recommends them.

Going by the text book definition of Dyshidrotic eczema, “an abnormality of the sweat glands,” the diagnosis is still vague.

A rash on the hands is common among people who work with skin-irritating chemicals and people with other skin conditions like eczema and psoriasis. A person can have a mix of two of these conditions. For instance, a person with atopic dermatitis may also get infected with contact dermatitis.  People with psoriasis may develop a fungal infection. In this example, you can treat the psoriasis aggressively, but it still won’t heal until you scrape it, find out that the person is suffering from a fungal infection, and then treat that.

I.  Classic allergic contact dermatitis develops from allergies to things like hair dyes, wood-working chemicals, rubber, nickel, formaldehyde and Neosporin. It tends to be very common among people in certain industries like the semiconductor industry (that usually exposes workers to chemicals like epoxy resins), cleaning industry, food service and restaurant industry.

II.   Irritant contact dermatitis, on the other hand, is caused by exposure to chemicals like solvents or through the use of surfactants such as over-the-counter medications, soaps and detergents.

Contact dermatitis is found to be more common if a person has other skin conditions like atopic dermatitis. Albeit the condition often adversely affects the hands, it may affect the arms, the face and other parts of body as well. It tends to be red, itchy and blistered at the start, and then as the skin becomes thicker with prolonged scratching, it becomes less so.  A classic instance of blistering contact dermatitis can develop from exposure to poison ivy and poison oak. Contact dermatitis develops on either the top of the hand or palm. In fact, the flaky, itchy and red rash can develop on the full hand. Of course, a fungal infection can be mistaken for dermatitis, and dermatitis can resemble psoriasis as well, thus, you cannot always distinguish the exact cause of that nasty red rash on hand just by mere appearance.

First, you need to look at person’s medical history and perform a physical examination. You also need to ask questions to determine what they came in contact with. Additionally, you can do patch testing to check if a person reacts to any of the things that people are commonly allergic to.

Psoriasis is a common cause of rashes on the hand. It is linked with psoriasis on other parts of the body like the knees, scalp and elbows. It can be either on top of the hands or on the palms, and is typically scaly, cracked, red and itchy. Moreover, it is often pustular. As we have mentioned previously, a person can suffer from both a fungal infection and psoriasis simultaneously and the two look identical. Therefore, you will need to scrape it and perform a biopsy.

This is an extremely common cause of red rashes on hands, and is associated with atopic dermatitis elsewhere – in the bend of elbows, on the face, behind the knees, etc.  Atopic dermatitis is fairly similar in appearance to contact dermatitis and psoriasis. It can develop on both sides of the hands, however, we see it more often on the top instead of on the palmar surface.

There are a number of variants of atopic hand rash, including hyperkeratotic eczema, nummular eczema and Dyshidrotic eczema. The diagnosis is done by performing a physical examination, studying the patient’s medical history, conducting patches, taking scrapings, and sometimes even doing a biopsy.

Furthermore, a person having hand dermatitis may use soaks and coverings such as Saran wrap or cotton gloves to improve the penetration and effect of topical steroids. Sometimes doctors recommend it when the case of hand rash is really bad. Avoid taking high-potency steroids for long periods, as they can cause thinning of the skin. Alternate various steroid compounds and strengths to boost effectiveness and alleviate resistance.

Treatments differ depending on the cause of red rashes on the hand.

For contact dermatitis, you eliminate the triggers. For fungal infections, you use antifungal medications, and you not just treat your hands, but other affected areas as well.  For atopic dermatitis, use topical steroids, tars and topical calcineurin inhibitors like Elidel and Protopic. Also, you must avoid soap, wear vinyl gloves for all wet work and use creamy moisturizers. Avoid doing jobs for the time being, where the hands might get irritated and the rash worsens.

Ultraviolet light, with and without a drug named psoralen, is highly effectual even for the most severe cases known. In topical PUVA, the psoralen us applied to the hands before putting them under the UVA light, making it susceptible to the light. As a consequence, the allergy cells in the skin are changed, and this temporarily controls the rash.

Another well-known therapy utilized to amend the cells involved in the inflammation is Grenz ray therapy. This is an older treatment that is effective and safe.  The therapy is a black light, which has energy that borders on X-ray, however, it does not penetrate beyond the skin. Both of the therapies require several sessions be completed, and are done in addition to all of the other precautions and treatments. Once completed, the therapeutic health benefits can last up to 6-months.

For oozing or blistered red rashes on the hand, compresses may be prescribed. After the acute condition heals in a week or so, stop the soaks and use recommended moisturizes and prescription creams. Recurrences may still happen, but do not worry. The treatments can be repeated.

Even though it is ugly, itchy and painful, get to know the cause, consult the dermatologist and follow the prescribed treatments to cure any malicious, red rash on your hand.

Enjoyed My Hand is Killing Me….What is this Nasty, Itchy Red Rash on My Hand? Share it with your friends so they too can follow the Superfoodsliving journey. 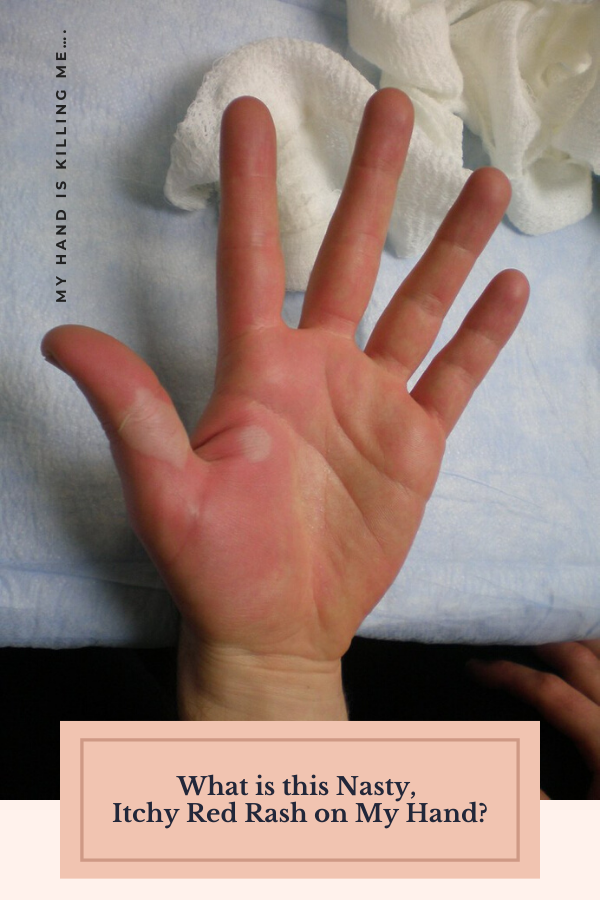